Becoming Friends With My Appendages 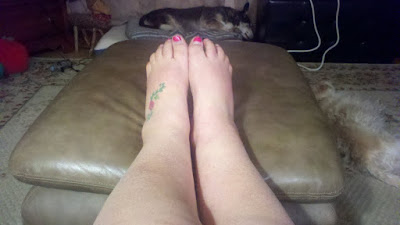 This is going to sound crazy (what? me sound crazy?) but, I'm trying to make friends with my legs again.

We became emotionally (and physically) distant from each other a few years ago - I don't really remember when. We've just grown apart... and now I just contact them whenever I have to shave - and, once you're single (at least like I'm single) - that isn't very often.

More recently, the trouble with our friendship has gone way beyond emotional distance.

A year and a half ago, my legs really started to piss me off. It was like they hated me or something! In July 2010, I stood on a stool and my right knee literally burst into pain. And it's basically hurt every day since. I've been to the doctor, to the orthopedic surgeon, and to the physical therapist. I've heard that it's arthritis, it's ITBS, it's my knee cap being pulled over to one side by a tendon or something. Then, October 2010 is when I did my I-am-a-big-fat-homecoming-float routine and broke my elbow. I also hurt my other knee in that fall.

Suffice it to say that, since that point, I've just been giving my legs the cold shoulder. I have only reluctantly (and infrequently) fed them lotion. I have only shaved them when A.B.S.O.L.U.T.E.L.Y necessary. I've hardly even touched them! I thought, "OK, Legs... You think you're gonna screw with me? Weeellll, right back 'atcha, bee-otches!"

And since then, my legs have gotten about as much attention from me as an unwanted roommate.

I've become more self-reflective as I started blogging and I've remembered my mother's old saying of "You scratch my back and I'll scratch yours." I've thought about the fact that I NEED to be friends with my legs.

I'm kinda up shit creek if they get too pissed at me.

So, for the last two weeks, I've been nurturing them with lotion and with actually getting down on the floor and just playing with them.

Well, not really... I just couldn't pass that up. But I have gotten down on the floor at least once per day and done all kinds of leg stretches. I am amazed at how painfully stiff and rigid my old friends have gotten from my inattentiveness.

Rebuilding a friendship can be hard. Especially after it's been damaged by neglect. But, I think that I've realized that a friendship with my legs is an important one.

I hope they forgive me. 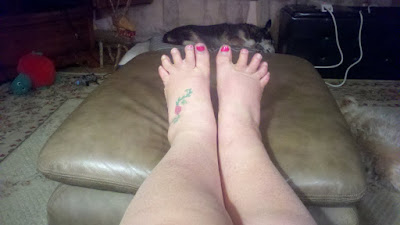 They did! They're happy little fellas!!
Posted by Jennneil at Monday, November 28, 2011