Hanging On By My Fingertips! 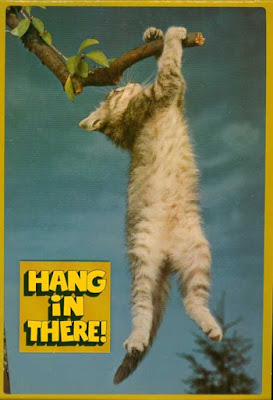 And I'm not sure why.

My weight has gone up. This morning, it was 231.5. I DO know why that's happened. Let's see, there was......
* the total lack of exercise
* the constant hand to mouth routine at Bunco
* yesterday's Thanksgiving dinner at school (ham, turkey, dressing, mashed potatoes, green bean casserole, sweet potatoes, and roll) - which I chose to eat
* last night's salad and chili at Hill Diner (a bowl, not at cup)

Day after tomorrow is my regular 4-month oncology appointment. I don't feel anxiety about it like I frequently have. I mean, it's nearly been two years since the cancer, my oncologist is always saying that recurrence would be rare, I feel good.....
So I'm not in touch with anxiety, but I wonder if its there.

Am I capable of having a doctor's appointment and not flipping out? I never thought so.

But maybe that's what is driving this kind of constant hunger that I'm feeling.
Isn't that what "feeding your heart" and "eating your emotions" means?

As I sit here, I realize that I'm also fighting magical thinking. And, boy, can I get magical! The little voice on the inside says "You're usually anxious before doctors' appointments and nothing happens. What do you think is going to happen since you're not having anxiety?"

I know from past experience that food doesn't shut her up. In fact, since my eating is frequently an exercise in self-hate, I think that food may actually make little Jenny more out of control. And food definitely makes Little Jenny stronger.

On some level, I know that, for me, it's all about the word "DESERVE".

I just read back over what I have written. It's always such a surprise to me what types out of my fingers!

What struck me was "food definitely makes little Jenny stronger". What does that mean?

It's crazy how you can know something and not know it at the same time!

Whoa. Lots of think about. What I immediately know is that I've got to find another way to take care of little Jenny.

***IMPORTANT DISCLAIMER***
I am not a split personality, and I don't have Dissociative Identity Disorder.

Little Jenny is my inner child.

If you're not familiar with the term, it's usually used to to describe the remaining effects of one's childhood experiences.

My inner child is basically where my scars live.

You have one, too.

Twelve-Step programs talk about "healing the inner child" as being one of the essential stages in recovery from addiction, abuse, trauma, or post-traumatic stress disorder. In my case, that includes eating.

Ooooh, just googled and found this interesting tidbit:
"The inner child can be considered a subpersonality, and many of those therapy approaches that work with subpersonalities deal with the inner child, even if they don't use that term. Internal Family Systems Therapy (IFS) has expanded the concept considerably in recognizing that there isn't just one inner child subpersonality, but many. IFS calls the wounded inner child subpersonalities "exiles" because they tend to be excluded from consciousness in order to defend against the pain and trauma that they carry. It has a sophisticated method for gaining safe access to a person's exiles, witnessing the stories of their origins in childhood, and healing them."

This is giving me lots to think about while I hang here.

P.S. DON'T FORGET TO VOTE ABOUT SWEET POTATOES ON MY POLL! 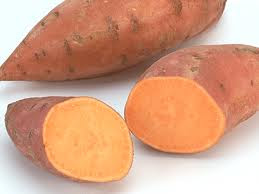 Posted by Jennneil at Wednesday, November 16, 2011