I'm SOOOOOO excited because one of best friends in arriving this afternoon to visit until December 12th!

It's Dianne, my balloon buddy, overeating buddy, laughter buddy, just-plain-over-the-top buddy. She's been gone for nearly two years and I HAVE MISSED HER!!!!!

I would be going on one looonnngg binge as soon as she gets here except for one HUGE saving grace. Dianne had weight loss surgery last September, has lost an exceptional amount of weight, and is strictly limited on what she can tolerate eating and drinking.

That SHOULD be a saving grace to me, right?

Only if I let it.

Life has got to be different tonight - for both of us.

Dianne HAS to make different choices. Her body won't let her do otherwise. Her emotional motivation is strengthened by her inability to put as much food and drink inside her as she used to.

My different choices have to come from a different place. And they're not very strong. My tummy is still huge and could hold a medium-sized dog (if I ate dogs - WHICH I DON'T)!

I feel like I need to put on some type of emotional armor to protect myself - from myself.

One of the things that I've noticed about my friends who have had weight loss surgery is that they frequently order what they've always ordered and then, by necessity, only eaten a couple of bites.

My fear is that Dianne will do that (which is perfectly fine!) --- as long as I don't take on the role of being her human garbage disposal. I have been known to do that. I'm a cleaner-upper of plates.

I also know that Dianne is so excited about having a Blue Moon with her friends. But, I imagine that one beer is going to last her all night. She will physically not be able to do it any other way.

I am able to drink a lot more wine than one glass. But am I willing to stop at one when I'm out with this group of fun people?

No. Honestly.... I'm not. Just leaving that as an esoteric question is a set-up for me to deceive you - and myself.

I need to be honest and say that no, I won't stop at one. I will drink three glasses of wine. That's what I do. Less than that, I can't feel the buzz. More than that, I feel too much buzz.

1. It's important that I not EAT FOR DIANNE. She doesn't need me to, but I worry about my subconscious ways of playing games with myself. If she buys something and only eats a bite of it, I need to keep my fucking hands away from it. And my fucking mouth!!!!!!! NO, NO, JENNY! STOP!

2. Today, I was a strong 224 pounds (meaning I couldn't move around on the scales and make it go up to 225). I need to remember the 20 pounds that I have stayed conscious in order to lose. I really can't say I "worked hard" for it, but since September 19th, I have stayed with my feelings, focused on my goals, and remembered who it is that I want to be. That's what the loss of the 20 pounds is.

I CAN'T LOSE SIGHT OF THAT JUST BECAUSE MY OLD EATING BUDDY (who no longer can eat with me) IS VISITING!!!!!!!

3. Though Dianne and I are both balloon people, I don't need to go laughingly
drifting off into Jennyland with her. I need to STAY GROUNDED.

4. I need to take it one day at a time. Tonight's plan: A bowl of beans, salsa, ketchup, and three glasses of wine.

5. And I just impulsively wrote this on my arm. 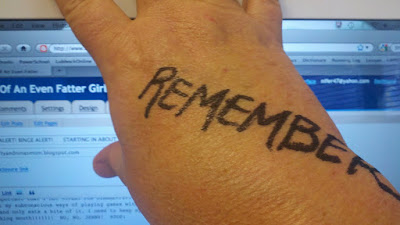 The bad thing is that I'm blogging during my lunch time at work. I still have to get through the afternoon - including an IEP meeting - now with Sharpie writing on me.

Please give me ideas of how to go into that dangerous place for me - OBLIVION!

What just popped into my head when I typed that was a line from the Lord's Prayer - changed to fit the situation.

Then I had to say the whole prayer to remember the right line of "lead me not into temptation...."

Funny how, in my life, they are the same thing.
Posted by Jennneil at Friday, December 02, 2011