It's Nearly The One Year Anniversary Of My Infamous Cousins Cruise. I'm Ready For The Next One.

It's nearly been a year since my first and only cruise. I went with my cousins and had a TOTAL BLAST. I wrote this last year and posted it on my Facebook notes. Tonight, I read it and it brought back all the wonderful memories!

I want to share it on my blog. Plus I'm lazy.

I've got to document this stuff somewhere before I get "hardenin' of the arteries" like our grandma and start doing my eyebrows with a blue ballpoint pen like she did.

My cousin cruise was SO MUCH FUN!!!!!!! However, I need to clarify the fact that it was really a Graham sibling cruise with a Graham-wanna-be (me) thrown in. The Grahams (my cousins J Tom, Samantha, Doak, and Timi) are my mom's older sister's kids. They were a huge part of my childhood. Kathryn (J Tom's wife) shoulda been born a Graham. But that would have been wrong.

HISTORY:
J Tom is 12 years older than me, Samantha is 10 years older, Doak is two years younger, and Timi is four years younger. J Tom worked for my dad at the newspaper office. He REMEMBERS my dad. That's always important to me because I don't really have many memories of my dad (he died when I was 8).

Samantha - well, what can I say - she was there for me during the most fucked up, horrible time in my life - my teenage years when my mom's drinking was at its worst, my mom's alcoholic convulsions and hospitalization, and the first months of my mom's sobriety. She lived with us for awhile both before and after my mom got sober while Samantha's husband was in Viet Nam. She was my rock. She took me to my first Alateen meeting.

Doak and Timi were my best friends from the time I was 8 until - well, until we all grew up and went our separate ways. From the time that my dad died when I was 8 until I essentially became an adult, I spent every other weekend with Doak and Timi. To be really honest, they were the bright spots in an otherwise fairly scary, lonely childhood.

Doak has always been one of my favorite forms of entertainment. He entertains me just by breathing! And Tyler has always reminded me of Doak - from the time that Ty was a little kid.

Timi thinks that she was just a hanger on. She doesn't know how important she was to me. Timi knows stuff about me that no one else knows.

Favorite (INSANE) memories of the cruise:
I haven't really spent much time around Doak since we were in our early 20's (over 30 years ago). And he was my ROOMMATE on the cruise. It was like being 11 again. I felt joyful, free, skinny and I laughed my ass off (I wish!).

One night at one of the elegant dinners in the dining room, Doak was sitting next to "Norma" a very proper lady that we met on the cruise. I JOKINGLY told Doak that I would give him $200 if he'd give me the bread off Norma's bread plate. Like a mature 54-year-old man, he grumbled "no". So, I upped the offer to $300. Again, jokingly. The next thing I know, I am watching Norma's piece of french bread arch over my dinner plate and land on my bread plate. Doak had waited until she turned her head the other way and then had stolen her bread. He and I started laughing. And picture a 9-year-old and an 11-year-old at the proper dinner table with a bunch of grownups. The more we tried not to laugh, the more hysterical things got. I think that Timi finally told us that we needed to leave the dining room. (She has always been more mature than me.) We weren't able to go back in and finish our meals because we never could get ourselves under control. I don't know if Norma ever realized that her bread was literally stolen from underneath her nose.

I always tired out before Doak and went to bed while he was still out making friends with everyone on the ship. After being in bed a couple of hours, Doak would always come in and badger me until I got up, changed out of my jammies into some clothes, and went to the smoking deck with him. One night, I just changed into a dress that I had been using as a swimsuit cover up - nothing on underneath. As we walked out of our room, I suggested that I knock on J Tom's door and see if he wanted to go with us. Doak said, "No, he and Kathryn are sleeping. Just knock on a random door." So, of course....... I did.

And then I hysterically RAN to the elevator, laughing all the way, pee running down my leg to the floor. It was like being an 11-year-old with a 56-year-old bladder. I laugh too much, I lose control! Plus, in my head, I was an 11-year-old running, not a 56-year-old fat woman. 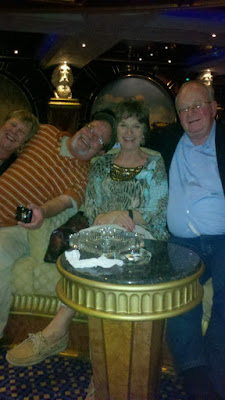 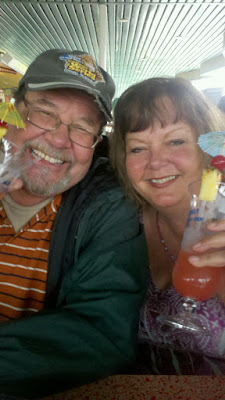 I still chuckle when I think about the bread or the pee.

I really want to save money to go on another Cousins Cruise. And this time, I'll be skinnier. And able to run and pee FASTER.
Posted by Jennneil at Wednesday, December 21, 2011