I've been blog-tied lately. Like being tongue-tied, I've known what I wanted to say but just couldn't get it out. I actually started a blog on Portion Distortion but it has sat, unfinished, in draft form for days now. Portion Distortion is a big problem for me. I find myself not wanting to look at it and not wanting to change how I do portions. Obviously, that's why I've become blog-tied. So...... I'm not going to go there right now.

I'm actually a big believer in talking about what I don't want to talk about (because obviously, if I didn't need to talk about it, I would be talking about it.) I believe our natural (though dysfunctional) human tendency is to talk around what really needs to be talked about most.

It's the same human tendency that makes my psychotherapy clients spend forty-five minutes of a session talking about how they always fought with their mother because they didn't clean the kitchen good enough and they always felt that their sister got more attention because she excelled in school and their first boyfriend tried to get them to smoke pot.....and in the last five minutes of the session as I'm trying to tie all the threads of their thoughts together....they say, "Oh, and my dad raped me when I was four and made me have sex with him from that time until I was fifteen."

Bam! There it was! What they didn't want to talk about.

I don't want to talk about Portion Distortion. I don't want to have to give up Jennyportions - which happen to be much bigger and better than regular portions.

But.... guess what? This is my blog and I'm fifty-seven! I'm not going to talk about Portion Distortion today! I'm going to wallow in my portions sit on my thoughts about it and save that topic for later!

Besides, we're having a St. Patrick's potluck at work today. I can't blog about portions before a potluck! That would....... that would.... RUIN things!!

* I'm lovinglovingloving Spring here in my town. Now, Spring here is not like Texas-Spring. I talked on the phone last night with my cousin who was sitting out on his front porch after an 80 degrees Texas Spring day while I was huddled under my electric blanket after a sixty degrees New Mexico Spring day. But, it's bright and cloudless and the breeze is gentle. It makes me want to sit outside and sun and walk and be in nature. Jenny-in-nature is a weird concept. Do you consider a community swimming pool "nature"? That's the best kind to me. The other nature - the one with bugs and stickers? That one freaks me out.

* Today I weighed 208. The stomach bug last week definitely got me off the 211 fence but I didn't stay at 205 like I was the day after I was sick. I'm comfortably wearing size 18 jeans now and have been bugging Barb to give me her size 16's. Last night, she gave me two pair. I excitedly put them on and realized that I'm no way close to size 16. I couldn't button them over my stomach - even after laying on the bed and trying to stuff my stomach into the jeans with my hand! But, it's nice having something hanging there on my closet door, looking me in the face, reminding me of what I'm working toward.

* I feel excited about life right now. I feel happy about life 99.9% of the time, but I don't always have a sense of excitement and anticipation. I'm looking forward to Spring Break and possibly going to Texas. I'm looking forward to Memorial Weekend and going to Texas to a family-that-I-don't-belong-to-reunion. I'm looking forward to spending summer at the pool. I'm excited about being involved in the community theater and possibly auditioning for a play. This week, I went to a "reading" of the play that will be performed next fall. Going to the reading and thinking about auditioning for a part is so way out of my comfort zone! It's fun!

* I'm aware that part of my excitement about life right now is that I'M NO LONGER THE FATTEST PERSON I KNOW. Isn't that weird? I feel more normal. Less like I stand out in a weird way. Well, I guess I still stand out in weird way, but not as much in a fat way. I recognize that I'm still fat. Still officially obese. But, I see other people who weigh as much or more than me. I know people that can't wear size 18 jeans.

And this is the first time in years that I haven't seen myself as the fattest (other than my Carol Jean) person that I know.

* Next Tuesday is my regular four-month follow-up appointment for uterine cancer. It will be my two-year anniversary. If this appointment goes well, I can start going to the oncologist every six months rather than every four months. Usually, by now (less than a week before an appointment), I'd be in my own version of a dark, scary forest full of "what if" and "don't kid yourself" and "of course you have cancer" monsters. I'm not there yet. And, I'd really like to not go there. But I'm not sure it's in me to go to a doctor's appointment as a sane adult.

P.S. Here is my lunch time Jennyportion of baked potato. It's filled with salsa, mushrooms, diced ham, English peas, green chili, and ketchup. And that's some asparagus and bacon salad next to it. Delish! 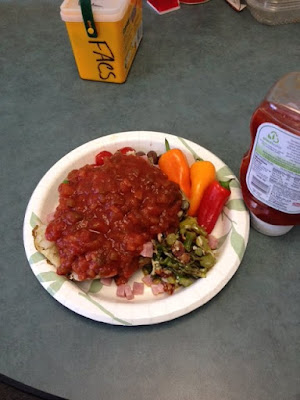 Do you see why I didn't want to talk about Jennyportions before lunch???
Posted by Jennneil at Friday, March 16, 2012