This is one of the most difficult hurdles in my weight loss journey.

Things I've Learned:
I've recognized that I, personally, do better when I don't eat between meals.
I know that I need to give up sweets as much as possible.
I've learned that I can substitute healthy food for unhealthy food and not miss the unhealthy choices.
I've accepted that I need to increase exercise.

But..... the eating less of things that I've decided in my head are OK to eat?
I'm not doing so good in that area.

I can remember my mom constantly telling me "Your eyes are bigger than your stomach." How I resented that! And I think that I've told you that her solution to my eyes being bigger than my stomach was to make me eat everything that I put on my plate even if I put more on it than I could comfortably eat.

I don't think that helped me in the long run.

It just taught me to make my tummy bigger so all the stuff I wanted would fit into it!

I am plagued with portion distortion!

I worked with an autistic child who used "visual cues" - laminated paper reminders for him to look at when things got so noisy in his head that he could no longer hear. When he would start having a melt down because of too much external and internal stimulation, I would show him a card that would say "shhhhhh" or "take a deep breath".

This would work as long as this child chose for it to work. If taking a deep breath or relaxing was not on his agenda at the time, he would just close his eyes when I showed him the visual cues.

Some recent examples:
I know a meat serving is supposed to be about the size of a deck of cards. Well, you'd think that I play cards with JUMBO-sized clown cards like this - 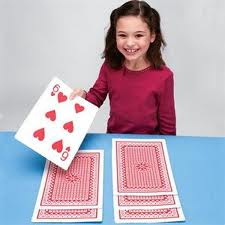 The other day I ate two chicken breasts that were each about the size of the jumbo cards shown above. I had this big long justification that I told myself (and anyone who happened to walk by me while I was eating) about the fact that both chicken breasts were leftovers and they would go bad if I waited another day to eat them so I needed to eat them both now.....

My reasoning made about as much sense as if I'd said that I had to eat both chicken breasts because I felt sorry for the one that would get left out so, in order to not hurt either breast's feelings, I needed to eat them both.

I've always had issues with that word. My mother used to say,

"Jenny, anything is OK in moderation."

Dictionary.com says moderation means the "quality of being moderate; restraint; avoidance of extremes or excesses; temperance".

HA! Hilarious! After typing that, I realized that my mom said MODULATE your voice.

Modulate - "to regulate by or adjust to a certain measure or proportion; soften; tone down".

Heehee! And I've held a powerful resentment against the word MODERATE for fifty years! Sorry, word!

But, see? See how I stray from looking at portion control? I don't even know what the hell I'm talking about now!

The chicken breasts were just one example of how I distort portions and lie to myself about it. Today at lunch, I ate a big bowl of bean soup that I brought from home. It was a meal. But..... I also ate a plate of cheese, chips, sweet peppers, and salsa that I found in the teacher's lounge. It was a meal, too.

Even I can do that math and realize that I ate what, for many people, would be two meals.

A cool blogger named Kelli at http://fatgirlsskinnyjourney.com shared some wonderful visuals to help with portion control. She shared it in the form of a pdf file so I printed them out and -- you got it -- am carrying them in my purse. 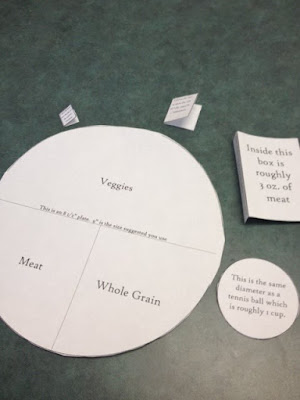 I think just the act of cutting them out was helpful. And, once again, it was an eye-opener about my perception of portions versus reality.

But, I am aware that my perception of portions has been, in part, influenced by the restaurants I eat at. I actually pulled the the meat visual guide out of my purse the other day in a restaurant and compared it to the piece of tilapia on my plate. My tilapia was at least THREE TIMES AS BIG as the 3oz meat guide!!

And, unfortunately, that brings up another healthy eating behavior that I have NOT learned - the ability to only eat a part of what's in front of me.

That's where the "self-will run riot" comes in. I've loved that phrase from the Big Book of Alcoholics Anonymous since I first heard it as a teenager. I've always known that self-will is the basis of my problems with eating. And, I guess, with all problem areas in my life. I have a lot of other words for self-will. Some are much prettier and more gentle and actually blame other people. I call it "being a princess".....
and "only child"....
and "poor little Jenny whose daddy died".....

And then, of course, there's the words like narcissistic and self-centered and hedonistic. (Those aren't pretty.)

But, I think the term "self-will run riot" pretty much hits the nail on the head. And, for the sake of time and energy and my last dregs of sanity, I'm just going to remind myself that I need to learn to tell me "NO".

NO to the second plate.
NO to another helping.
NO to the whole thing.