Nearly To A Milestone. And Other Things Rolling Around In My Head.

Since Easter, I've been telling myself that I'm not going to blog until I can blog that I've lost 40 pounds.  Then tonight, I realized that that was "stinkin' thinkin".

It was like saying "I'm not going to take this medicine until I feel better".

That is such an unsafe way for me to think.  I have 25 years of self-sabotage under my belt.  I like to pretend that I haven't lost this much weight before, but that's a lie.  In the last 27 years, I've lost this much weight four times.  And, each time, I've SOMEHOW turned my mind off, gone back into Jennyland full-time, and eaten myself back into a place of oblivious self-hate.

Can you be oblivious and feel self-hate at the same time?  Technically, I doubt it.  But you know what I mean.

So... four times being this low.  How can I make sure that this time is different?

Well, here's my ideas.....
1.  I'm older.   I don't know if that gives me more motivation or just makes it easier to lose.  But I DO know that you don't see many elderly fat people.  And that fact scares me.  They must either die or become home bound or lose weight.  I want to be in the third group.
2.  I'm taking my time at this.  I have always been able to easily lose weight.  All it takes for me is not stuffing myself with copious amounts of food.  I know I'm lucky in this way.  When Donna and I were going to Jenny Craig, it was obvious how different our metabolisms were.  She struggled with every tenth of a pound - eating much less than me - while I lost between one and two pounds most weeks.  I'm aware, now, of how much I would eat in my previous oblivious state.  I would eat a meal before a meal.  I would go to McDonald's and get two meals.  I still eat a lot.  As I've told you, portions are really hard for me.  But, WHAT I eat is different now.  A lot of veggies or a lot of apples or two chicken breasts is different than two hotdogs from Sonic on my way to dinner at DeColores where I would have cheese enchiladas with an egg and all the fixings.
3.  Most of the time, I don't feel like I'm depriving myself now or "dieting".  I know I'm eating at Subway too much and risking all of a sudden being TOTALLY SICK OF THAT and never going back like I did with the Budget Gourmet frozen dinners.  But, it's not like being on Optifast or Jenny Craig or even Weight Watchers.   I did make that commitment to my blog that I wasn't going to drink alcohol or diet sodas until I was under 200.  In hindsight, that probably wasn't a very good idea because it sets up the sense of depriving myself.  Luckily, alcohol and diet sodas have been easy for me to go without (well, except for that one drinking day last week) so I'm pretty much sticking to it.  But, I know better than to say something like "no chips and salsa" until 200" or "no ketchup".  It would be a set up for failure.
4.  I'm doing what I think works for me - not necessarily what people tell me will work for me.  I'm weighing every day.  All my fat life, I've been told to only weigh once a week or to go by how my clothes feel.  But, for me, I know that weighing every day works best.    I'm not making myself write down what I eat.  I know that is a tool that many people use but it really doesn't work for me.  Being organized and anal about writing things down has appeared to work because that's like my personality.  I am very organized and compulsive FOR SHORT PERIODS OF TIME, and then blow it off.  I follow this pattern in how I deal with money, cleaning my house, keeping my car clean, keeping my appointment calendar, following diets, keeping progress notes about my clients, doing crafts, exercising, watering plants - in addition to following this pattern with writing down what I eat.
5.  I'm blogging.  This is helping TREMENDOUSLY right now.  Only God knows why.  I have some ideas:  I'm truly learning about myself by writing my heart.  I have many "Ohhh, so THAT'S why I do that!" moments while blogging.  For some reason, knowing that some of my friends read this (and new virtual friends) makes me be accountable.  It's so weird because I don't consider myself an accountable person.  I say 'yes' all the time - even when I'm not going to do something, I have been known to make promises and commitments that I can't keep, I can usually bullshit myself out of any situation (except for tickets).  I'm very flighty, very Gemini.  I am not accountable when making commitments to myself.  Diaries haven't worked.  Journals haven't worked.  I lie to myself all the time.
But, somehow, knowing that my thoughts and dreams and wishes might get read by you has worked.  Thank you for being out there.

Miscellaneous things that are rolling around in my head that I need to get out:
1.  My doctor congratulated me on losing weight but then, unaware of the exact extent of my ability to be crazy, used the words "your" and "weight loss" and "rapid" in the same sentence.  Now, no one will understand this if they don't live in the scary neighborhood in Jennyland, but I'm frightened of "rapid weight loss".  It's one of those Seven Signs Of Cancer indelibly carved into my brain since childhood.  I worried about my mother losing weight.  I've worried about Tyler losing weight.  I've worried about Nina being skinny.
And, to my wonderful doctor and friend, Dr. Carr:  Michelle, I'm sorry for insanely blabbering when we had that conversation this week.  I'm sorry for being a 57-year-old woman and asking in an 8-year-old voice if I'm losing weight like people do who have cancer.  How effing embarrassing!!!!!
But, that really is a fear.  And I don't want to let it sabotage me.  I don't want to start eating to see if I'm still able to gain weight.  I'm pretty sure I still have that ability!
2.  I bought two new kitchen utensils.  They're really cool but, because of them, I've sat here tonight and eaten two whole potatoes as an after-dinner snack!  I bought a thing that slices potatoes really thin and a thing that you put in your microwave that makes potato chips.  Both from Pampered Chef.  (Jen, what are they called?)  I used two whole potatoes and made these chips tonight. 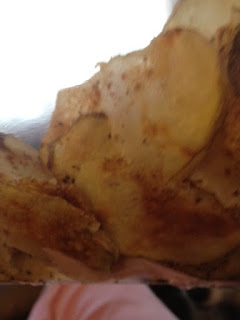 Then I ate every one of them.  It's so cool because you don't use anything but the potatoes and seasonings.  I put WAY too much salt on them so I imagine my weight will be up tomorrow.
3.  I get to cut my blood pressure medicine in half because of my weight loss.  When I went to the doctor this week (and had my usual going-to-the-doctor anxiety that I could feel throughout my body), my blood pressure was 103/72.
4. I think I'm going to try an experiment with ketchup.  Now that Heinz has come out with these.... 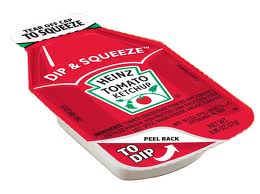 I'm thinking about limiting myself to one per meal.  I hate to admit this, but that will SERIOUSLY cut down on the amount of ketchup I use.  What do you think?
5.  I love you and appreciate you.  Even if you weren't able to muddle through this whole long blog.