I don't know how long it's supposed to take to get from Amarillo to Oklahoma City.

Donna and I left the hotel at 10:00 this morning and rolled into Oklahoma City at 7:30 tonight.  But, boy....... did we have fun today looking at the funky and tacky of America!

We started out this morning with the goal of finding "the big pair of legs" that Stanley Marsh built in a field outside of Amarillo.

I don't know a lot about Stanley Marsh but I do know that he is a wealthy Texan in Amarillo, a recovering alcoholic, he's a prankster, and has a sense of humor that I value and love.  He's the one who built Cadillac Ranch on some of his property.

We read about these tall legs that he built to honor his favorite poem by Percy Shelley:


Ozymandias
I met a traveller from an antique land
Who said: Two vast and trunkless legs of stone
Stand in the desart. Near them, on the sand,
Half sunk, a shattered visage lies, whose frown,
And wrinkled lip, and sneer of cold command,
Tell that its sculptor well those passions read
Which yet survive, stamped on these lifeless things,
The hand that mocked them and the heart that fed:
And on the pedestal these words appear:
"My name is Ozymandias, king of kings:
Look on my works, ye Mighty, and despair!"
Nothing beside remains. Round the decay
Of that colossal wreck, boundless and bare
The lone and level sands stretch far away.

Not really knowing how to work our GPS system (well, really it was because Donna was leading), we initially ended up out in the middle of nowhere.  Really.  I mean  - we had to stop when the dirt road deadended.  After taking the time to figure out the GPS, we finally found this: 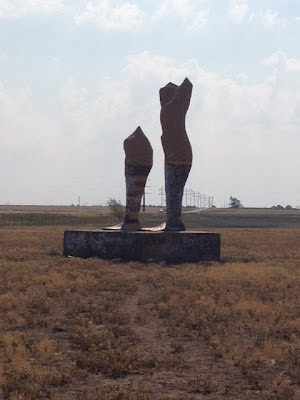 So first, I actually thought I could get through this: 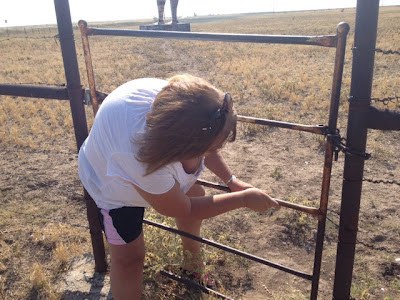 Then I realized that I would have to crawl through the barbed-wire fence: 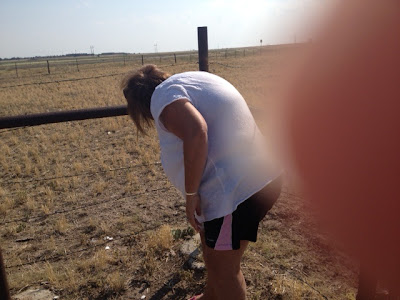 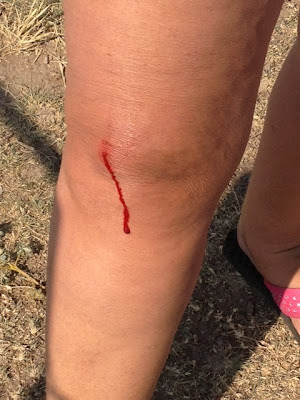 --- and decided that I was too old and too fat to crawl through a barbed-wire fence and go traipsing off through a field.  In my flip-flops.

As I got back in the car, a new beautiful white pickup drove up to us and an old man in a Bing Crosby-looking hat said, "You girls OK?"

I explained that we were trying to get into the field to see the legs up close.  He said "what is that?" and pointed to the marker next to the road that is an example of Stanley Marsh's pranks.  The marker talks about how Percy Shelley and his wife were crossing the plains of Texas and came across the giant legs and that that was when Shelley wrote Ozymandias.  The marker also talks about how the original marker was stolen by students from Lubbock, blah, blah, blah.

The marker is obviously a joke.

Anyway, when the old man asked what it was, I told him it was a marker.  He said he thought it was a dumpster and was going to dump his trash in it.  He told us to have a good day and drove off.

Later, Donna and I were talking about how nice Texans are.  And how nice it was for that old man to come check on us.  And how it was weird that he lived around there (because, really, it's in the middle of nowhere) and he didn't know about the legs and the marker and he thought it was a dumpster and he didn't have any trash in his pick-up anyway.......

Later as we were looking for Floating Mesa, another Stanley Marsh prank, we googled Stanley Marsh and found a picture of him, taken in May, in a Bing Crosby-looking hat.  IT WAS THE SAME MAN, IN THE SAME HAT, WHO HAD TALKED TO US THAT MORNING BY THE GIANT LEGS!

I was so excited!

After another hour of driving around, we finally found Floating Mesa where Mr. Marsh had a large bluish/white banner put around a mesa to make it look like the top was floating.

Oops, I just deleted the picture of that.  Wasn't too cool anyway.

Then, we went to Cadillac Ranch - a place I have to visit every time I go to Amarillo.  It is such a strange bit of Americana.  Stanley Marsh buried twelve Cadillacs, nose first, in a field.  People from all over flock to the field to spray paint the Cadillacs.  Including us. 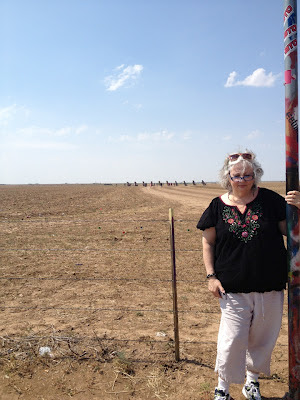 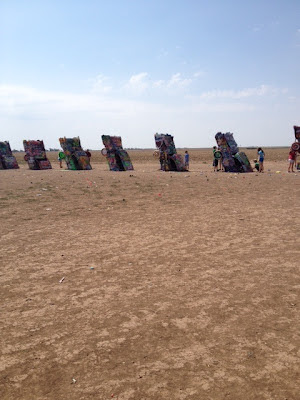 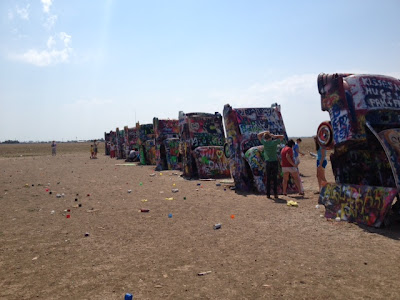 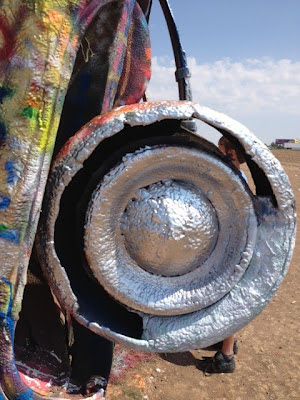 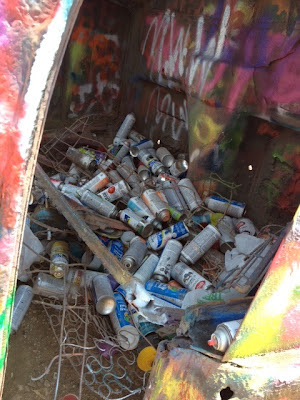 Writing "We Were Here": 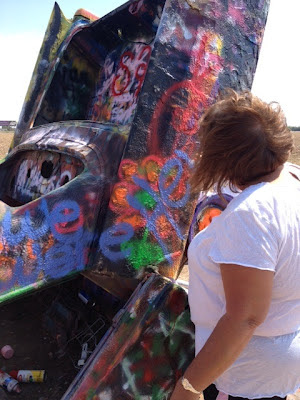 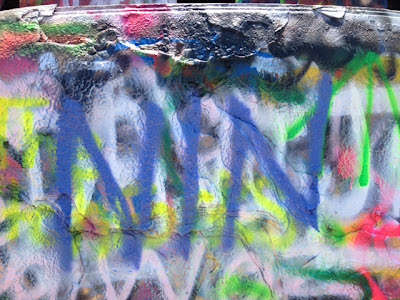 Then, off we went to find the Texas-shaped swimming pool so I could stick my toes in it: 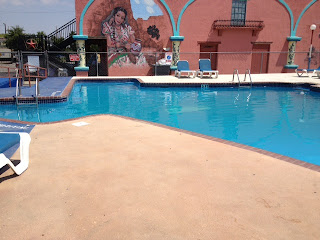 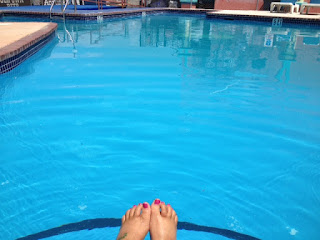 After my yearly stop at the "Jesus Chris Is Our Lord Travel Center" - which I have to go to because I just think it is so w.e.i.r.d. ..... 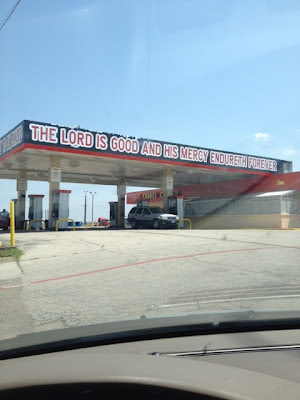 .... We went to the Volkswagen Bug graveyard where five VW bugs are buried.  (Cadillac Ranch copycats!!!!!!) 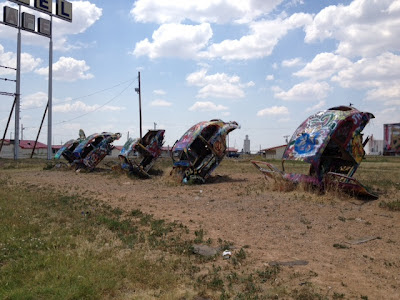 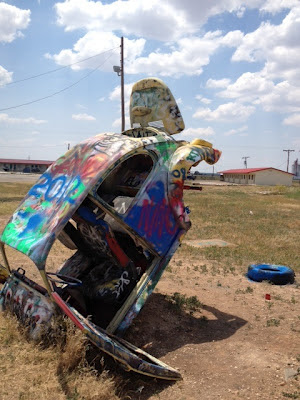 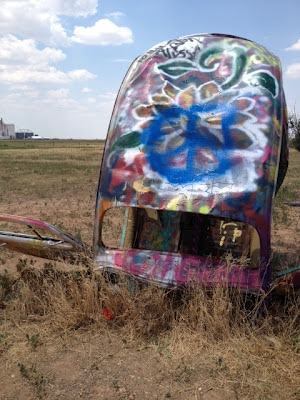 As we continued to make our way toward Oklahoma in what is beginning to look a lot like a buried car/gas station tour, we stopped at the first Phillips 66 gas station in Texas.  It was TINY and very cute! 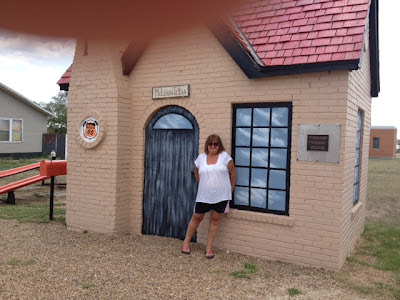 See?  I should stand only by big things, not tiny things.  This little house makes me look like a giant.

But, an employed giant. 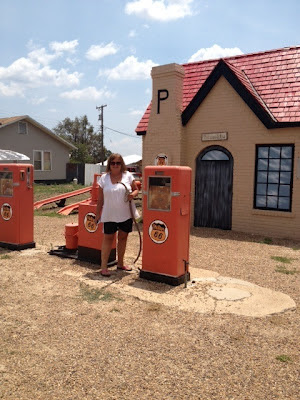 As we got close to the Texas/Oklahoma border, I started to feel wistful about my state.  So I made sure that the first Texas sign I saw, I kissed! 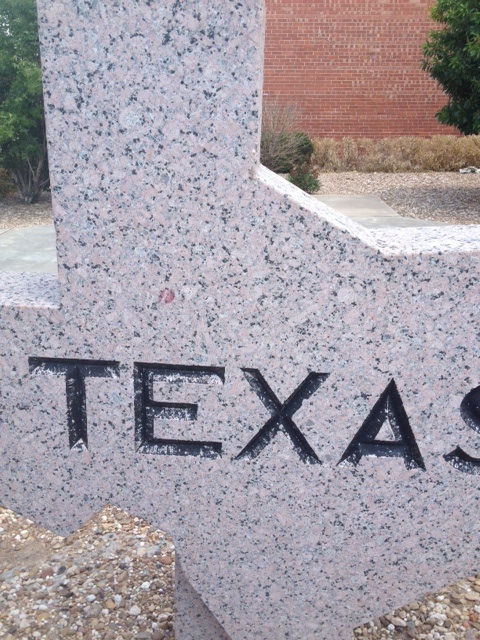 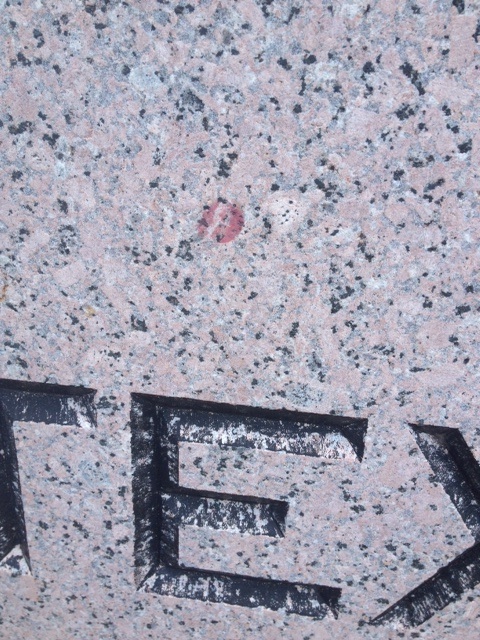 And then to another gas station - this one a Conoco that was the model for "Ramon's", the garage in the movie, Cars. 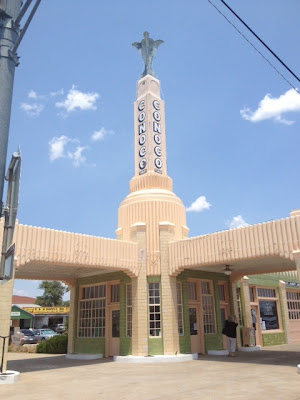 And here's a model of the one from Cars. 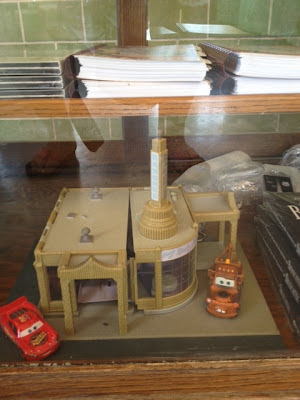 We ate dinner in El Reno, Oklahoma - the Home of the Fried Onion Burgers.  They are really quite amazing.  I've decided that fried onion burgers are the only way to eat 'em!!!!

I'd like to come back next May 7th for the 25th Annual Fried Onion Burger Festival in El Reno.

And we ended the day in the best swimming pool in the state of Oklahoma - which just happened to be at our Baymont Hotel.  Whodathunkit.

A memorial to POWS in El Reno brought tears to my eyes. 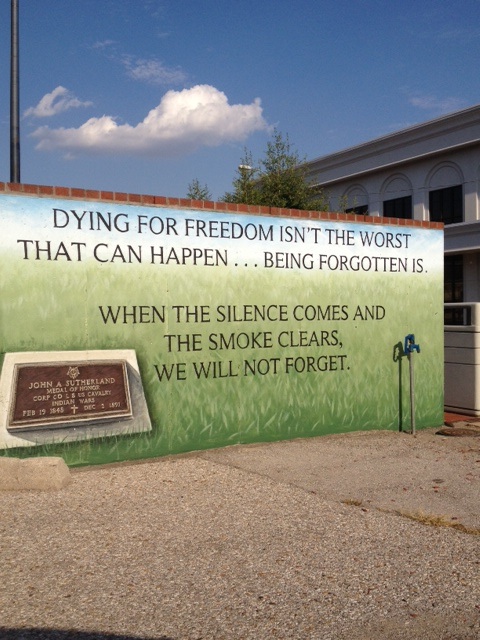 You know, unfortunately I don't have the moolah to take trips to distant countries or ocean voyages.  Hell, I can't even pay for Nina to FLY back to New Mexico from Missouri.

But, I can make the best of a road trip and make it Fun with a capital F.

We have really cool things here right under our noses.