Sloths, Penguins, And Sawfish. No, This Isn't A Food Blog Today.

I promise I didn't eat them.

Today is the last real vacationy day of my vacation.  I forced myself to get out of Shawnna's pool tonight for the last time until next summer.  Next week, I work registration at the Middle School.  Then, official work starts the following week.

We'll get back to talking about my physical fullness (and the fact that my clothes fit like sausage casing) next week.

Today, I want to share my pictures.  So, if you're looking for an weight loss blog, don't look here tonight because I ate..
..McDonalds' for breakfast
..Spaghetti Warehouse for lunch
..Red, Hot, and Blue BBQ for supper
..plus banana pudding

Like I said, today this is not a weight loss blog.

Shawnna (my friend for 45 years), Donna (my friend for 25 years), and Nina (my daughter for 19 years) and I rode the DART train to downtown Dallas today to go to the Aquarium.  Then we met Shawnna's husband Melvin and went to as many museums as we could on a Friday afternoon.  That ended up only being two (we were trying for three) but it was majorly fun. 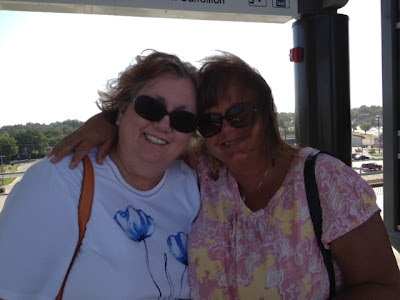 I like to say that Shawnna is my oldest friend but that pisses her off because she is a little bit younger than me.  But please note:  SHAWNNA WILL BE 58 A WEEK FROM TOMORROW!
Then, we won't have to worry about me being older.

Now, pretend that you and I are talking and I pull out my wallet and show you a bunch of grandbaby photos.  But, unfortunately I don't have grandbabies (well, except for my pretend granddaughters Ady and Avery) so instead I'm going to show you a bunch of pictures of animals.
Grandbabies.... Animals.... There all cute and cuddly.


To my children Tyler, Nina, Elisa, and Josh:  This is how people get babies. 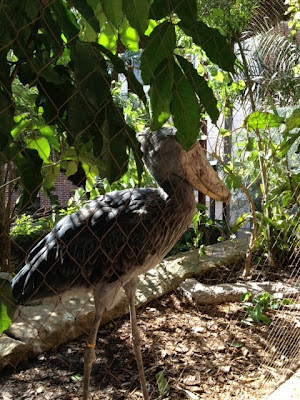 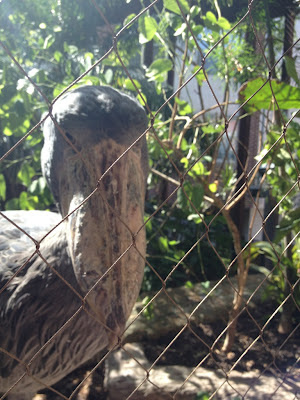 You write a letter to the stork who lives at the North Pole with Santa.  You ask him for a baby.  And if you've been good and haven't touched anyone's private parts, he will bring you one in nine months.  The stork, not Santa.

Trust me, this works.

One of my most favorite animals at the aquarium was the sloth.  Sometimes, I pretend I am a sloth.  I do this on those low energy days when I just can't get it up.  Figuratively, not literally.

Have you ever watched a sloth move?  Other than in the Ice Age movies?  They move very slow.  The aquarium's sloth (who I have personally named Peggy) only moved fast when she was handed some food.  (Uh-huh, we know what her problem is.....) 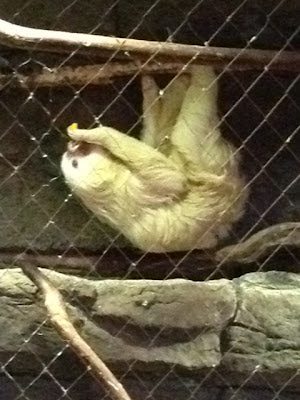 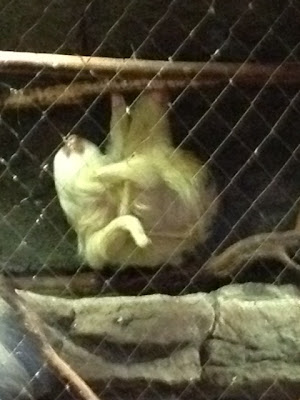 Scratch it where it itches even if it's in your ear. 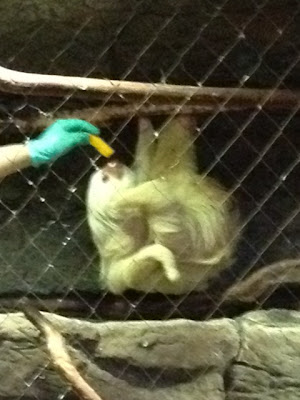 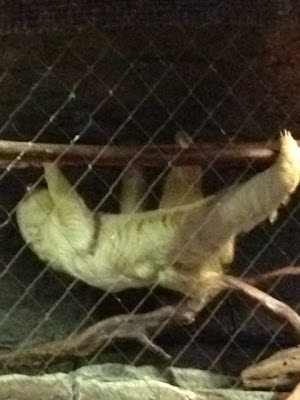 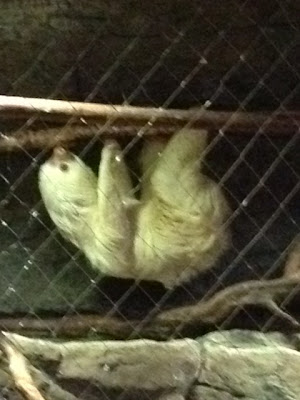 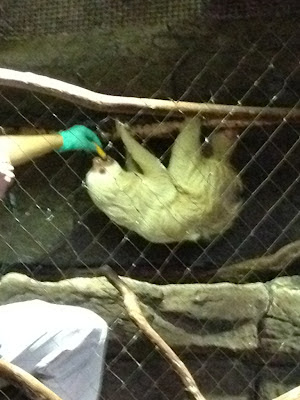 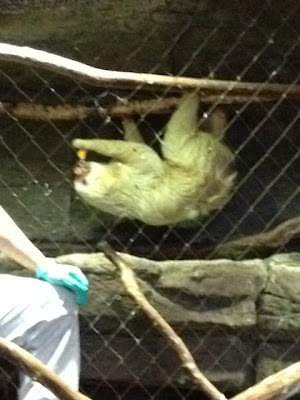 Once Peggy worked her way to the dinner table, she only moved to scratch and to eat.

Y'all know how I feel about birds.  Well, there were a lot of birds at the aquarium - most flying freely around the room.  I was walking around entertaining the idea that I would make this the year that I got over my fear of birds.  I was thinking about how I could reward myself for facing my fears by getting a real bird (or a tattoo of a bird) next summer.  These were my thoughts until, while watching the manatee, a leaf fell on me and I screamed in front of a mother and her three innocent little children because I thought I was under bird attack.

But I did like this bird.  Because it was caged.  Good thing... because it is like the Frankenstein of birds.  It's called a Hawk-headed Parrot or something like that.  Sounds pretty much like a nightmare, huh? 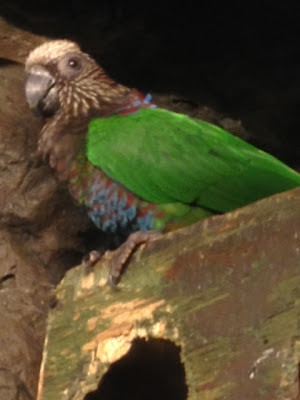 And I like these birds because.....  well, because they're pink. 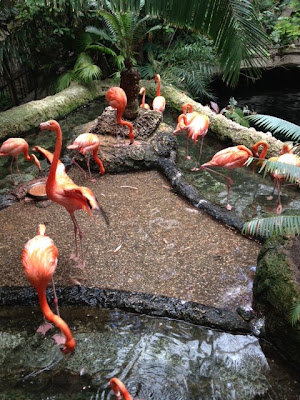 Do you remember when we used to order these out of the back of magazines???????

Did we really get seahorses?  Were they freeze-dried or something? 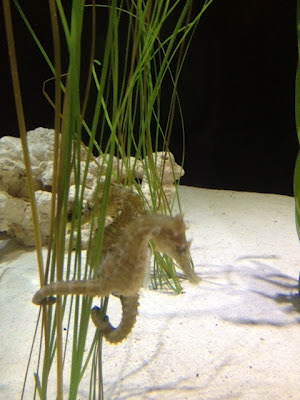 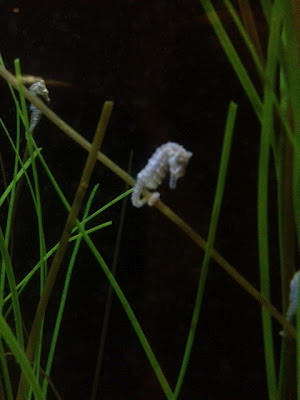 
And I don't know what this thing is.  It was a fish laying on the sand, looking like the sand.  Very strange.  You tell me what it is, you win. 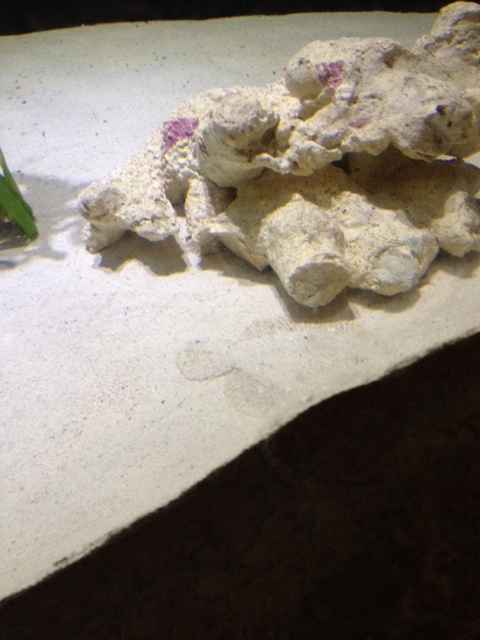 Can you see it?  It was alive and moving.

The penguins were cute.  But, to be honest, they weren't nearly as cute as animated penguins are.  I want my penguins to be fat and waddley, and not stinky.   Phew, these stunk. 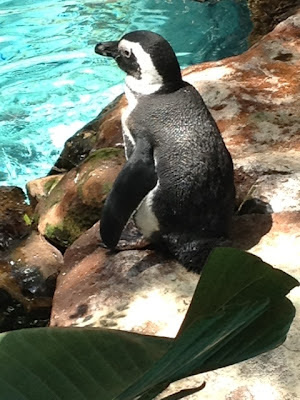 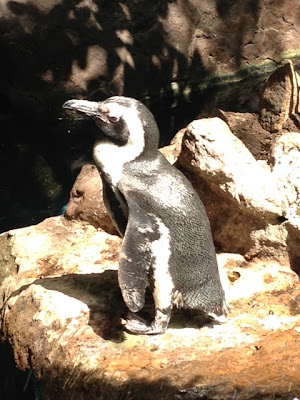 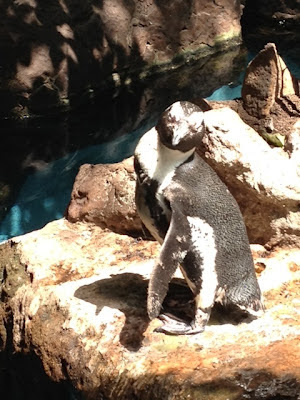 And I don't think of penguins as birds.

Now, I did think of these things as worms but they were really eels. 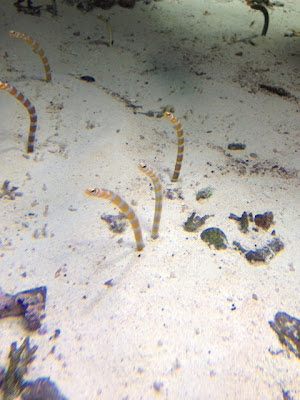 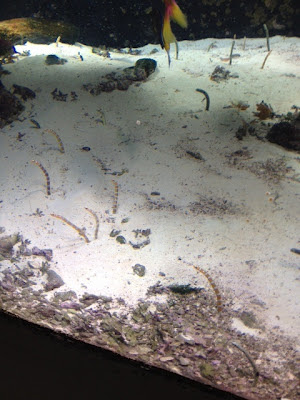 These wormy eels (or eely worms) didn't like the fish and would go lower into the sand when a fish came near.

But NOTHING today gave me as much joy as watching the sawfish chomp down on already dead squid and other fish for their lunch.  (I'm an overeater, remember?)

They were just so. dang. cute.

I have no idea about the real anatomy of a sawfish - nor enough interest to google it - but their bottom sides look like they have eyes, lips, and penises.  Well, the boys do.  Obviously what looks like lips really are lips because that was how they ate.  But what looks like eyes are probably gills or some other fish thing.  And what looked like a penis probably wasn't.

But, I tell ya.  That's what it looked like.  And, on top of that, the sawfish look like they have lipstick on their lips.  That warmed my heart and made me feel an instant bond with them.

I carefully videotaped the sawfish having lunch.  On the videotape, you can see them maneuver the squid into their mouths and swallow and you can hear me yelling "GET 'EM! GET 'EM! GET 'EM!" and Nina saying "Mom, shhhhh.  Mom, be quiet.  Mom, you're embarrassing me."

But, alas.  In a moment of sloth-like dullness, I accidentally erased the video.  So you'll just have to make do with pictures and your very own imagination. 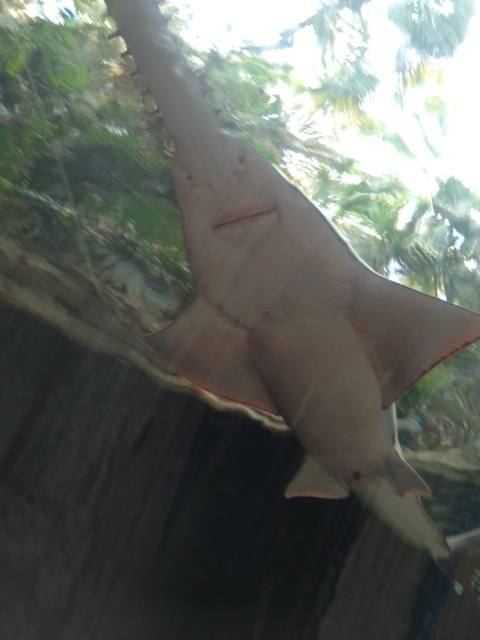 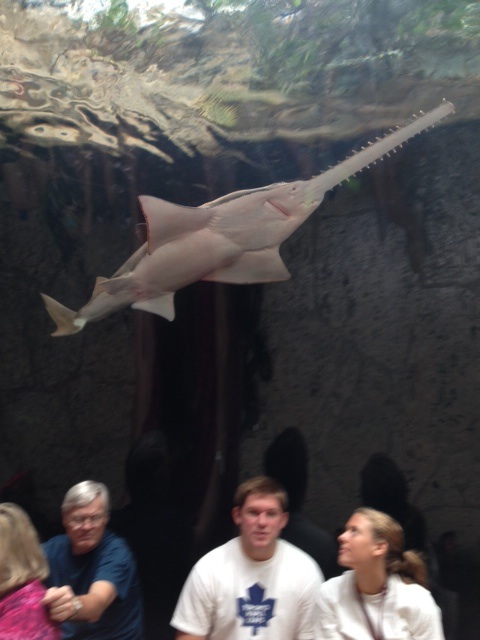 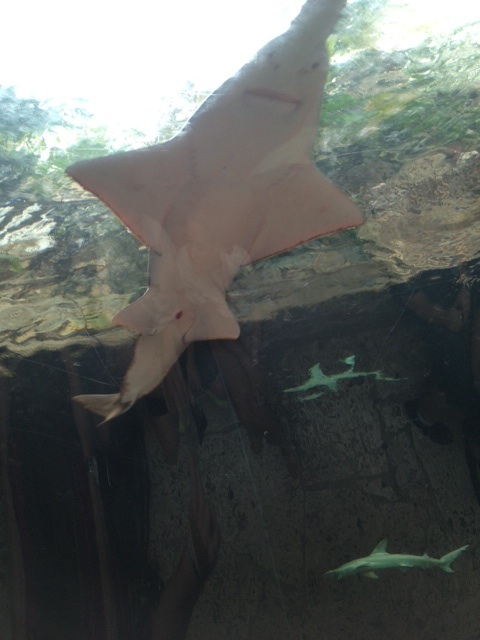 Aren't they just the cutest things you've ever seen?

With their "eyes", lipstick lips, and little penises, they look like little Asian crossdressers.

No offense intended.  They are my favorite animal in the whole wide world.  Except dogs.


But the fact that something that is really not their faces looks like a face makes me want to share the following picture with you.  About a month ago,  I became aware that I see faces in inanimate objects.  I know.  It's a little like seeing dead people.

I see a smiling face on my bedroom ceiling.
My fan always looks like it has a face.
I look for faces where there are none.

I took a picture of the following face.  I imagine it as Mr. Bill saying "Ohhhhh, noooooo!" 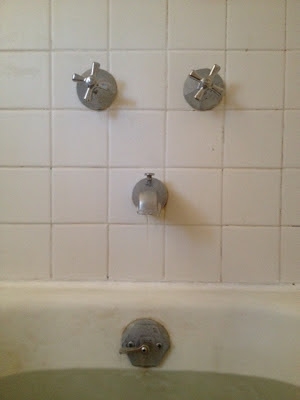 Now, I can't get into my bathtub without replaying all the old Mr. Bill sketches from SNL in my head. 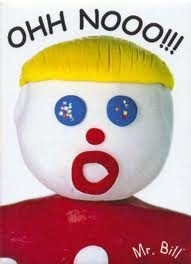 Otherwise, I'll have to institutionalize myself.