Making Friends With My Scales

My scales and I have been at odds recently.  Even though I have been eating consciously and sanely for a week, my scales haven't moved. It fact, it's shown me 216.5 and 217 after showing me 215.5 last week.   Because of it's lack of generosity with letting go of the pounds, I've been cussing it out every morning.   That's not helping matters because then, I hurt it's feelings.  And when it's feelings got hurt, it became even more resentful and wouldn't let go of the pounds.

It was just a vicious cycle.

So today, I decided to apologize and try to treat it better.  So, I gave it a bath and then, while Barb was dying my hair, I made my scale feel better by coloring it and making it beautiful.

In the process, I realized it was a girl and named her Agatha.

Here she is now. 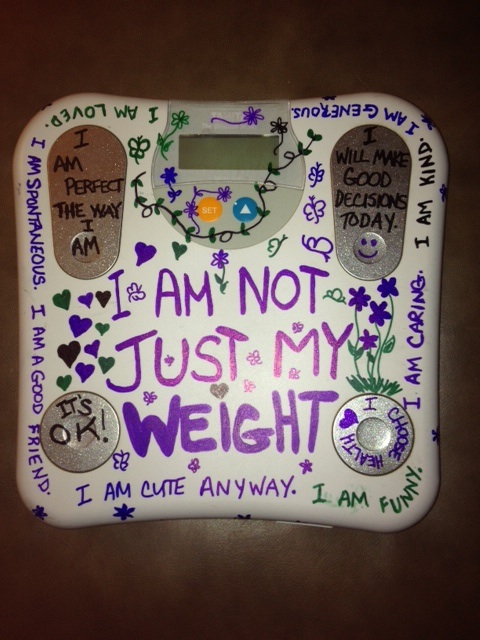 Isn't she pretty?  And, since I've become friends with her again, she is giving me all sorts of positive feedback.

At least verbally.  We'll have to see if she's really willing to give up some of those pounds tomorrow morning.

Love,
Jenny and her new best friend!
Posted by Jennneil at Wednesday, September 19, 2012