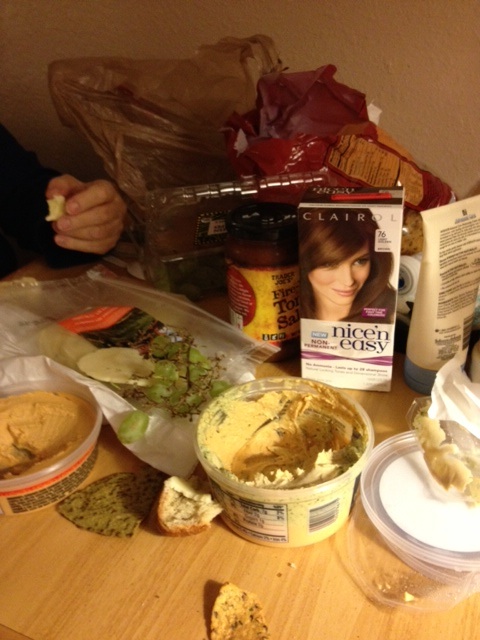 I've had a wonderfully relaxing three days in a hotel in Artesia.  I've...
* swam at least once a day
* lounged in the hot tub at least once a day
* spent a couple of hours at a wonderful antique store where I bought....... a cookie jar.....
* tried to sneak up on the United States Law Enforcement Training Facility - (things behind
barbed-wire fences and "DO NOT ENTER" roads interest me)
* shopped every day at K-Mart.  OK, I know that's low life but - hellloooooo, who do you think you're talking to?  And they had clothes for $2.99.  I kept buying Tyler shorts.  And stuff for myself.
* gotten a pedicure that included an amazing calf massage
* driven around
* taken Moe for dog walks to poop and pee
* visited statutes of cows' butts and other things
* driven around
* visited with a young woman who I hadn't see since she was 15.  Now she's 32!
* driven around
* taken naps
* Facebooked
* Pinterested
* driven around
* talked Donna out of one of her shirts that I really liked
* read
* watched Grey's Anatomy, Revolution, Last Resort, and Walking Dead
* driven around
* and eaten.

Did y'all hear that?  EATEN.

Our hotel has free breakfast, of course.  It's better than many hotels - this is free breakfast in a restaurant - eggs and bacon or sausage, then your choice of hashbrowns, french toast, or pancakes.  And orange juice.

Well, every self-respecting overeater knows that you must eat any food that can be conceived as "free" because, Lord knows, you spend enough money on it the rest of the time.

I felt like I had to get my money's worth.  Even though I wasn't paying for the hotel.

And then there was the blackberry cobbler and icecream.
And the sopapillas.
And the wine.

Tonight, we decided that it would be good if we ate the food that we actually brought and put in the hotel room frig.  So we had stale bread and hummus, grapes, cheese, chips, and cantaloupe.   It was the most healthy (low calorie) meal that we've had since we've been here.  But we ate it like two slobs.  No plates, no napkins, right in the middle of the table with the hair dye, hand lotion, and doggie pain pills.

In the middle of stuffing my face like a cave dweller, I thought about the message that my eating environments gives my insides.
Nice environment (restaurant, manners, good company) = pig out
Trashed environment (eating half naked, sitting sideways on the arm of a chair, with your fingers, while watching reality tv) = healthy food

All I know if that, right now, I'm not taking this seriously.

And it's a serious matter.

It's my health, my life, my self esteem, my future.

But, I've just been feeding the urges this weekend.

I took a wrong turn on my way to fat camp and ended up at hedonistic camp on the opposite shore.

I have a doctor's appointment this Wednesday for my annual physical.  (My anxiety about that is another blog.)  I want to ask Dr. Church about lap band surgery.  I've asked him about it before and he's said something about it being high risk for blood clots.  But that was a few years ago.

I also need to think about Weight Watchers again.  My blogging friend, Deezer, on the other side of the world has been very successful with WW.