Last night, I decided that I need to be "done" with alcohol.  I've known the time was coming for quite some time but I've hidden that information from everyone - but myself.  I never was able to get into a place of self-denial.  I know too much about alcoholism.

I didn't want to mention my concerns about my drinking because ........  then I'd have to stop.  And I wasn't ready to stop.

I truly believe that alcoholism is a continuum. 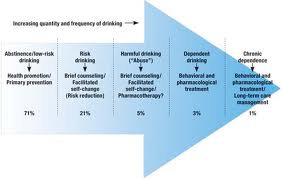 I don't think I'm down at THE bottom.  In fact, I think I'm in the stage of "harmful drinking".  But it feels like MY bottom.

By growing up in an alcoholic home and around AA, Alanon, and Alateen beginning at the age of 15 - I don't think I need to go all.  the.  way.  down.

My mom always said that alcoholism was like an elevator.  You can ride it all the way to the bottom floor or you can get off on any floor you want.

I want off on THIS floor.

I don't really know what floor it is but I know that it's the floor I'm supposed to get off on.  It's MY floor.

My heart of hearts said it loud and clear last night.  As I said above, it's been strongly hinting at that truth for awhile but I'm chosen to ignore the inner voice.

I don't drink every day.   But, for the 20 years that I was married to Charlie, I didn't drink at all.

Let me begin at the beginning.

My mother's alcoholism was one of the defining aspects of my childhood.  So was her recovery - beginning when I was 15.

During my later teenage years - when my peers were heavily drinking (the legal age to drink in Texas was 18) - my best friend, Shawnna, and I were doing crazy stuff like rinsing our mouths out with Boons Farm Strawberry Hill wine, sprinkling some of it on our shirts - and then going into parties acting like we were tipsy.

Even back then, alcohol did not bring out the best in me.

Somewhere in my mid-20's, I got worried about my drinking.  Mainly because I used alcohol to deal with a specific problem that I was experiencing.  I saw too much of my mom in me at that point.  So I stopped.  And I started going to Alanon meetings - for people who love alcoholics.  I thought I wouldn't "fit" into AA then because I hadn't drank long enough or bad enough.

But I've ALWAYS known that any drinking was very risky behavior for me.  If a child has one alcoholic parent, they have a 50% chance of developing alcoholism.  I was one of those.

And then there is the concept of the "addictive personality".

While going to Alanon in my mid-twenties, I met Charlie at an open AA meeting.  For the next twenty-one years, I drank so infrequently, it really shouldn't even count as drinking.  Here's an example of how my yearly physicals with Dr. Church would go:
Dr. Church:  Do you drink alcohol?
Me: Yes.
Dr. Church:  How frequently?  Daily?  Weekly?
Me:  No.......  yearly.  I usually have a glass of wine at Christmas.

And that's really how it was!  At Christmas, I'd buy a bottle of wine and have maybe one glass with Donna.  Then sometime during the spring, I'd throw the bottle away - still half full.

I've been divorced for ten and a half years now.  I started drinking more regularly soon after the divorce - but still mainly on special occasions.

Just during the last four years has alcohol become a more important part of my life.  It started out with going to happy hour weekly with friends.  Then, lots of weeks, it was happy hour two or three days a week.  Initially, drinking was only something I liked to do "out" - I didn't even like going over to people's houses to drink.  It was a social thing - have some drinks and watch the people.  It was boring to do it at someone's house.  I'd rather have Diet Coke.

Sometime in the last two years - since I've been an empty-nester - I've started drinking at home.  Always just wine.  Sometimes with guests, frequently by myself.

When I first got divorced, I remember having dinner and drinks with Donna at DeColores.  Having a drink with dinner was kind of a new thing for me.  I told Donna then to "watch me" and to tell me if she got concerned about my drinking because I knew my risk level.

In the last couple of years, Donna has expressed concern about my drinking on more than one occasion.  I've pretty much just shushed her.

Less than two months ago, I threw up all over my living room after having people over for a party.  Before I hurled, I participated in a big crying jag with two friends and Tyler.  Three out of the four of us were crying.  Drunk behavior.

That is not the first time I've thrown up because of drinking.  Here's the pattern:
But do you see the pattern?  Do you see the escalation?  Now, I know many people who throw up from alcohol much more frequently than me. But that doesn't matter.

It is a bad, bad sign for me - who hates throwing up more than anything in the world - to throw up from drinking on three separate occasions in the last eleven months.

For the last few months, I've drank wine on more nights than not.  Not to the point of drunkenness, but to the tipsy point.

Alcoholic thinking:  If you're going to drink, drink enough for the effect.  Otherwise stick to Diet Coke.

I drank lots of wine night before last.  To the point that I was a bit shaky for most of yesterday.  Then, at Thanksgiving lunch yesterday, Donna (who doesn't have an addictive bone in her body) said she was going to put some vodka in her Cran-Ras/Sprite drink.  I thought that was a great idea!  I had one, too.  I watched how much vodka Donna put in.  But, in my thinking, if a little bit is good, more will be better.  So, on my second drink, I put in maybe double the amount of vodka.  And Donna of course, nursed her first drink all evening, while I went all the way through the happy > buzzed > tipsy > stone cold drunk continuum.

On my third drink, I stuck with my increased vodka amount - maybe between a third and a half of the glass was vodka, the rest Sprite and Cran-Ras.

After my third drink, I took the dogs for a walk with Nina.  I was woozy but able to stand on my feet.   I came back in, sat down, and it's like THEN it hit me.  My memory is so hazy but I remember Elisa asking if I was going to get sick.  I told her 'no' and then proceeded to spew all over myself while sitting in the recliner in Donna's living room.    In front of Donna, Elisa, and........ Nina.

Somehow they got me to the bathroom and undressed...   Maybe I took a shower at that point.  I really don't know.  I remember sitting on the toilet and asking Nina to leave the room because I knew I was going to get sick again.  She went out of the bathroom but continued to watch me through the door.  So she, my daughter, saw me puke all over myself again and again and again and again.  I just sat there on the toilet, barfing.  She came back in and was trying to set a trash can in my lap but I kept batting it, and her, away.

I don't EVER want to experience that level of shame and self-hate again.

I am Nina's rock.
I failed soooooooo badly.
It brings tears to my eyes to even sit here and write about it.
How could I do that to her?  Of all people?
I don't know if I'll ever be able to forgive myself.

And Elisa, my beautiful foster daughter, cleaned up after me.  She saw my fat, naked body.  She cleaned up my puke.

That is not the way it is supposed to be.

I never, ever want it to be that way again.

I threw up so much that I pretty well sobered up.  Enough to know that this had to be the end.

It has to be the end while I still have enough control to make it the end.

It is not who I want to be.

Even though I knew that it would make all my friends collectively roll their eyes, I knew that the first thing I had to do was put my decision on Facebook.  Sounds strange,  but it has to do with accountability and transparency.

I seem to not be safe unless I am keeping myself accountable and transparent.

Believe me, I feel even more embarrassment because I put it on Facebook.  But I knew I had to do it.

I sent private messages to my two most special program people.  And I called two other friends who are active in AA.

I'm going to an AA meeting Sunday when I get home.

I think I could do this without AA.  But I don't want to.  For two reasons:  One, even though I know I'm done with drinking right now, I might forget that I'm done with drinking later.  Going to AA will keep that from happening.  And second, the twelve steps of AA have been a part of me for over half my life.  I know the power that the fellowship of AA can offer.  I believe in the promises of the Big Book.  And that's what I am holding on to now.

THE A.A. PROMISES
If we are painstaking about this phase of our development, we will be amazed before we are half way through. We are going to know a new freedom and a new happiness. We will not regret the past nor wish to shut the door on it. We will comprehend the word serenity and we will know peace. No matter how far down the scale we have gone, we will see how our experience can benefit others. That feeling of uselessness and self pity will disappear. We will lose interest in selfish things and gain interest in our fellows. Self-seeking will slip away. Our whole attitude and outlook upon life will change. Fear of people and of economic insecurity will leave us. We will intuitively know how to handle situations which used to baffle us. We will suddenly realize that God is doing for us what we could not do for ourselves.