It feels so good to feel back in control again.  Big Jenn has got Little Jenny all sqwushed down.  I am IN. CONTROL.  VIGILANT.  CONSCIOUS.  AWARE.

I also know that getting a big head about it is not going to get me anywhere.

Three days on Weight Watchers.
Three Christmas ornaments on my weightlossadvent calendar.
FIVE pounds down from Sunday.
To be fair, I'm really only down a pound and a half from where I had been for the past month.  But there at the end of last week, when I was taking the Green Coffee Bean Extract and stuffing my face, I went from 214.5 up to 218.  That was what got my attention - seeing myself at nearly 220 again.  Today, I was 213.

I'm not criticizing Green Coffee Bean Extract.  I have a friend who is actually being helped by it.  She is less hungry, more energetic, and has lost about five pounds since she began taking it.

I.....  well, I had an emotional adverse reaction to it, I think.  I took it three times a day for a week and proceeded to stuff myself with food --- I believe in an attempt to make sure that it didn't work.

It was just too easy for me to sabotage.  And why I sabotage things that actually might help, I don't know.  But I know I do.

It's that rebellious part of me.   Why couldn't I have been rebellious like normal people and, as a teenager, sneak out of my house and drink and sneak boys in through my bedroom window????

But noooooooo.  When my friends were being rebellious, I was still sleeping with my mom and pouring out her alcohol.

I choose now, as an old fat lady, as the time to be rebellious.  And I get rebellious about things that could help me.  Talk about sabotage!!

It reminds me of when the doctor gave me that medicine that was supposed to make you leak diarrhea if you ate fatty foods.  Do you remember that?  I remember sitting on the examining table and being so excited as the doctor told me to look at it as a policeman for my mouth.


"Every time you're tempted to eat a potato chip, fried food - anything fatty - just imagine that there is a policeman in your mouth with a big stop sign, saying "STOP".

When he said "STOP", he raised his hand like a crosswalk guard.

After a few days, when it was time to take my leaky diarrhea pill, I'd petulantly think "Wellll, maybe I don't want a policeman in my mouth*." And I just wouldn't take it, choosing to stuff myself with fatty food instead.

Jenny is that petulant child.  I think I probably really was petulant as a child.  Ooooh, look at these synonyms:

Right now, that's the part that's sqwushed.  (And that word is not squashed.  It is SQWUSHED.   I've said it all my life but I don't think it actually has a spelling.  Which I guess means it's not a word.)

I know it won't stay sqwushed.  Tonight my friend, B, and I were talking about the fact that both of us have this part of our personality that has to be free/out of control/spontaneous/something.  It's like there always has to be a release valve on our personality.  And of course, neither of us have a healthy release valve.  YET.  (We're gonna get there.)

B's image of it is a little man in her brain that keeps running around trying to get out.  And he always finds a way. 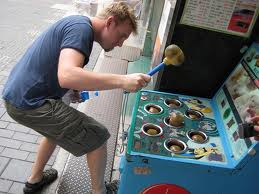 Except for those rare, special days when I, Big Jenn, am IN. CONTROL.  VIGILANT.  CONSCIOUS.  AWARE.

I should just be grateful.  Because, today, I was the boss of me.

*GET YOUR MINDS OUT OF THE GUTTER ABOUT THE POLICEMAN IN MY MOUTH!!!!!
Posted by Jennneil at Wednesday, November 07, 2012