For Dinner I Had Two Hotdogs And A Bowl Of Sadness

For a week now I've been blue about my friend Jen and my pretend grandbabies, Ady and Avery, moving away.  We had a little goodbye party for Jen last weekend.  I pretended that I was going to see her a lot more before she goes.  But I'm not.  Today, she called to let me know that the girls are leaving tomorrow - to go to Jen's mom's house - so Jen can focus on packing for the last few days.

On the way back from the grocery store I went to Sonic to get a diet strawberry limeade.

I ended up eating my feelings.  And it was ugly.  REALLY ugly.

I ordered two hotdogs - one "Chicago style", one chili-cheese dog, and a large order of tater tots.

And here's the stupid, crazy, overeating maniac thing I did:

Because of my embarrassment and shame about ordering two hotdogs, I ordered

so it would look like the food order was for more than one person.

It would be funny if I wasn't feeling so sad.
Well, it's funny anyway. 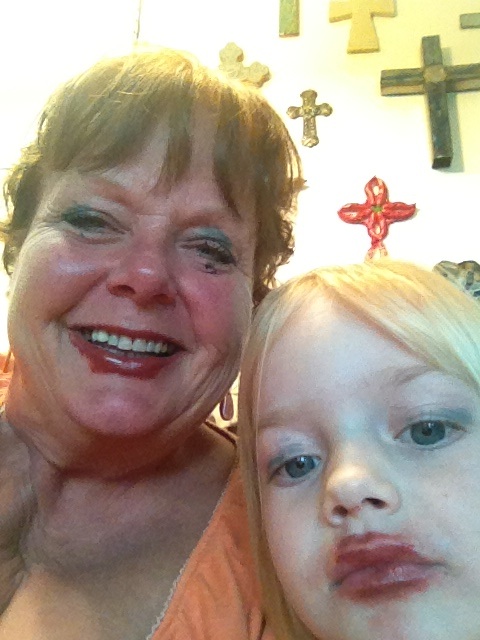 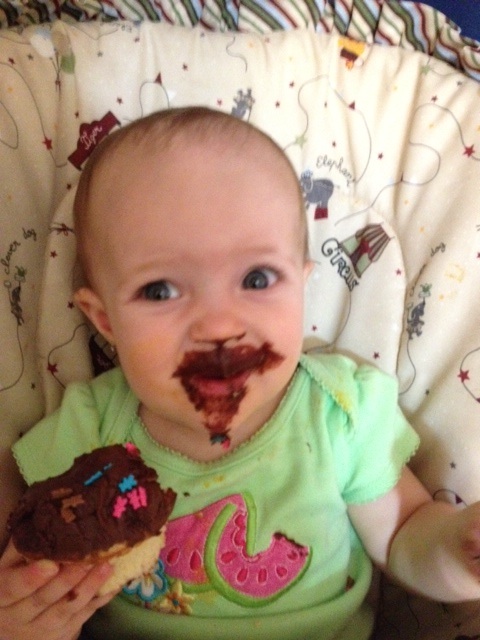 Here's A Picture Of My Boobs. 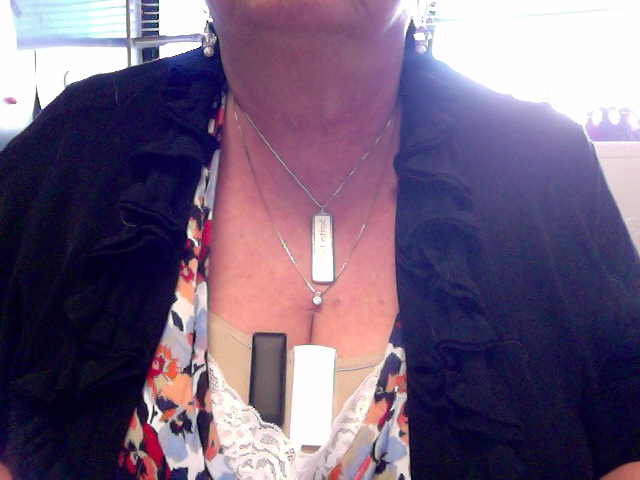 It makes me feel like I'm doing something even though my Fitbit currently says I've only walked .47 of a mile.

Believe me..... in my case, the pedometers are much more titillating than the boobs.

Love,
Jenny
Posted by Jennneil at Wednesday, January 16, 2013 No comments:

2.  Last night, after blogging, I ended my holiday binge siege with Sonic chili-cheese tater tots, a Sonic Philly Steak Grilled Cheese sandwich, and a small banana pudding blizzard from Dairy Queen.  I couldn't just stop the siege quietly.  I had to end it in a volley of gunfire.   Directed at myself.

Those are my confessions.

Now here are the little changes that I'm going to make for today.  Just today.  I'm really going to have to do this one day at a time.

1.  With every cup of coffee at work, have a glass of water.

2.  Try coffee with no creamer.  Since Thanksgiving, I've been putting York Peppermint Patty creamer in my coffee.  Like between 1/4 and 1/2 cup of creamer in my coffee cup.  Granted, it is a large coffee cup but I figure I've been drinking nearly 2 cups of CREAMER a day!  So, I want to try either no creamer or ---- here's a new for me ------------- FOLLOW THE DIRECTIONS ON THE CREAMER CONTAINER AND USE THE "SUGGESTED" SERVING AMOUNT.  Not a Jennyserving.

3.  Only eat what I brought to work to eat - ham, avocado, string cheese, blueberries.  No candy.  No matter what.

4.  When eating out with B tonight, order the teriyaki chicken, salad, and broccoli.

6.   Be gentle with my knee.  Use the heating pad at work.  Do some floor stretches.  Don't worry about "taking a walk" but try to get in a pedometer mile just by doing what I'm supposed to be doing.  Plan an evening in the therapy pool at the Aquatic Center.  Can't be tonight because there is play rehearsal but maybe tomorrow night? 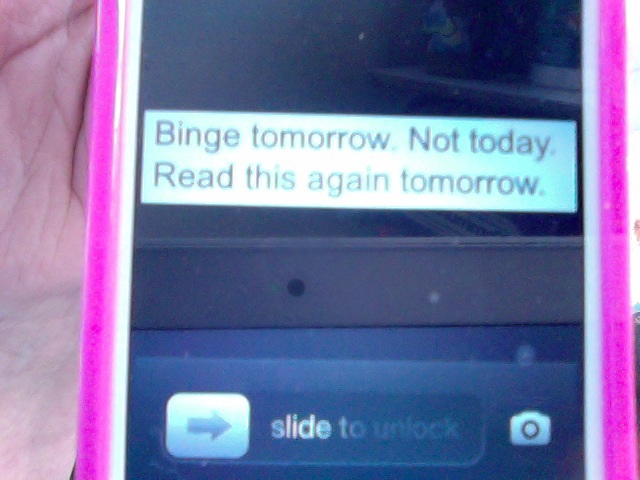 If I can do JUST THAT, I will have made progress.

Posted by Jennneil at Wednesday, January 16, 2013 No comments:

Oh my God.  Someone needs to tie me up and cover my mouth with duct tape.  And it's not because of my lack of verbal boundaries -- it's because I am SO TOTALLY OUT OF CONTROL!!!!!!

I'm as out of control with eating as I've ever been.  I've just been sitting here cramming stuff into my mouth to the point of feeling sick.

I feel like I did when I was a smoker.  I'd make a plan to quit and then smoke like three packs on the day I was quitting.  It was that human (at least in Jennyland) trait of gorging oneself before giving up what one is gorging on.

Does that really happen or is that just me?

I've now been out of control, mindless, unconscious for over a month.  In the last couple of days, I've opened my eyes and have seen the havoc I've wrecked on my diet/weight/health/self esteem.  Unfortunately, becoming conscious of my behavior has not made me stop.  Instead, it's filled me with self-hate to the point that I really feel like, today, I've been punishing myself with food.


"Oh you stupid, stupid, stupid girl.  You have fucked up so badly.  You should just cram stuff into your mouth until you go all the way back up to 250.  You think you're uncomfortable now sitting here in too tight pants in a sugar coma, hardly able to walk because your knee hurts so bad?  JUST WAIT.  JUST WAIT UNTIL YOUR CAN'T WEAR ANY OF YOUR PANTS AND THE FIREMEN HAVE TO COME AND GET YOU OUT OF YOUR HOUSE BECAUSE YOU'RE TOOOOOOO FAT TO GET OUT YOUR DOOR!!!!!!!"


Whoever this is inside of me, she's an ugly, mean bitch.  I don't like her.  But maybe if I let her out here in my blog, she'll serve the purpose of a domineering, bossy coach who will shame me into getting my shit together.

I'm not even sure what happened......
I quit drinking.
I got worried about my kids.
Nik died.
Doak died.
Sandy Hook happened.
Christmas came.
Money went.
Nina got sad.
My friend's moving.
Tyler's car broke.
I had night sweats.
Mo couldn't walk up the stairs.
Fear got a hold of me.
School started.
The play got stressful.
Bunco happened twice in one week.
My house got messy.

But for some reason, I let it take me down.


Right now, I visualize myself as a football player at the bottom of a heap. 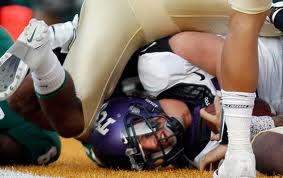 That's me.  That groin area on my shoulder is Doak's death.  That skinny leg in front of my face is my financial situation.  That knee up by my chest is Tyler borrowing my car - that was all clean and dressed up like a reindeer for the Christmas season - for what seemed like f.o.r.e.v.e.r.  That green uniform laying next to me is Nina going through her scary/sad patch.   You can't even see all the other life events laying on top of me.

Well, not anymore.  That ball is at the other end of the field.  Possibly in the next county.

I've gotta make a game plan to get that ball back and RUN.


I wish I could be witty and write this whole blog post with a football theme - labeling all the tools I have to help me "win the game" by saying things like "writing in my blog is one of my defensive linemen",  and "cleaning out all the dangerous food from my kitchen is my offensive right guard".

But I don't know any football terms but quarterback.  And that's the one I want to be.  Because they get the most attention.  I just finished  googling to come up with the terms defensive lineman and offensive guard.

Lest we forget, I am the person who, just a couple of days ago, announced on Facebook that I was rooting for the Atlanta Braves to win the Superbowl playoffs.

Roci had to tell me that was a baseball team and that the football team was the Falcons.

Speaking of, are they still in the running?

So, cutting through all the "ha, ha, ha, let me make this into a joke" and other crap - here are my tools.

They haven't changed from before.  But I need to give them life by typing them into my blog again.

2.  Write down what I eat.  That's why I pay every month for Weight Watchers online tools.

3.  Wear either my Fitbit pedometer or the Weight Watchers one rather than just looking at them sitting on my dresser.

4.  Go to the chiropractor about my knee.

6.  Buy the Nutra-Blast or whatever it's called that I've been wanting and use it.

7.  Stop eating stuff I don't even really enjoy like candy.

8.  Drink WATER.  Drink it at least frequently enough that I can remember when I drank it last!


Hah!  Just a strange little insight....  I just had to go back and edit that list because, in the middle of typing it, I switched from first person to second person.  I started out saying "write down what I eat" but, by #4, I'd changed to second person and was writing "go to the chiropractor about your knee", "stop eating stuff you don't even really want", etc.

Or maybe it was just shitty grammar.

Just need to start over.


P.S.  I really know there is not a Betty inside of me.  I'm a therapist.  I know I'm not really multiple.  Besides, Donna would tell me if I was.  Just want to make sure you know that.

Besides, Betty isn't inside of me!  She lives in Lubbock.