Close But No Cigar

I use that term frequently and always wonder about it's history.

Here's what it says:

Fall just short of a successful outcome and get nothing for your efforts.

The phrase, and its variant 'nice try, but no cigar', are of US origin and date from the mid-20th century. Fairground stalls gave out cigars as prizes, and this is the most likely source, although there's no definitive evidence to prove that.
It is first recorded in print in Sayre and Twist's publishing of the script of the 1935 film version of Annie Oakley:

"Close, Colonel, but no cigar!"

Here's what I did.  I dressed for Curves - tennis shoes, t-shirt - then went straight to the Coffee Booth for breakfast.

I'd like to jokingly say "does that count?" but, give me a break, I KNOW it doesn't count.

As my dear friend, Carol Jean, used to say, "No matter how much you'd like life to be different, Jenny, thinking about doing something is not the same as doing it."

But, I did make a few good choices today.  I sat with my friends this morning while they ate french toast (Judy), quiche (Joan), breakfast sandwiches (Jerry), omelets (B), paninis (Mimi), breakfast burritos (Jen and Kris), and huge cinnamon rolls (Karen) ------ and drank my greenish/brownish/purplish nutriblast.

I identify with that.  I was very aware that Karen left one perfect bite of cinnamon roll on her plate and she didn't lick up the sauce on her plate because it was "too buttery".

In Jennyland, I'm not sure there is such a thing as too buttery.

But I enjoyed my nutriblast - even though this one was much too salady tasting.  I put extra "field greens" in it and only half a banana.  Have you ever drank lettuce?  That's kind of what it was like.  I had to add a package of "pink stuff" to make it drinkable. 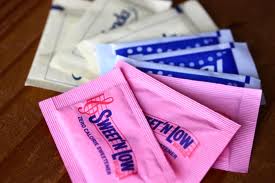 I had to google that, too, because I don't ever know what the pink stuff actually is.  Like I identify cars, I identify artificial sweeteners by color.

For lunch, I had blueberries and cottage cheese.
For supper, Nina and I are going to eat at Subway.

I have been a successful eater today.

Not a successful exerciser.
Even though I thought about it.