Weenie Woman (And This Has To Do With Conflict, Not Skinniness Or Penile Things)

I pride myself in being a peacemaker.
I'm big on compromise.
I'm a fan of negotiation.
I'm good at mediating other people's arguments.
I believe everyone is entitled to their opinion.
I strive to be nonjudgemental.
I believe that I can't know what the world feels and looks like to another person because I have never walked in anyone else's shoes.
I try to turn the other cheek.


In other words, I am a weenie.

Isn't it funny how our strengths can also be our weaknesses??

Today, someone pissed me off.  Through an email, she made me feel that she questioned my professional abilities and that she thought she knew better about something that is really and truly "my business".  In her email, she squashed a treatment team decision made by a treatment team that she is not a part of.  And possibly, she vetoed a plan that might have been in the best interest of a child.

And I caved.
Because (my words this morning) "I don't want to make waves".


Being a peacemaker, being good at compromise, teaching negotiation, mediating............... all of that is just one side of the coin.  The other side is my fear of conflict. 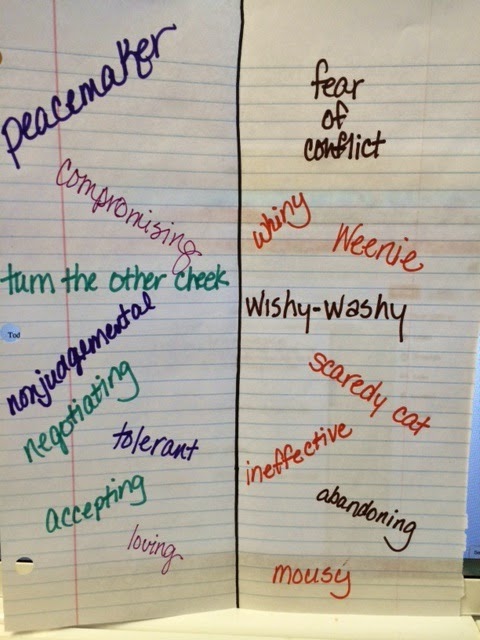 With anyone beside my kids, I am a mouse.

Whoever heard of a weenie social worker???

And this character strength/flaw impacts other areas of my life, too.

There is someone very important to me who is angry at me because I haven't been what she needs me to be in her life.   As with all stories, there are two sides:
My side is that I have done everything I can to meet her needs but her emotional 'hole' is unfillable.  It will never be enough.
However, her side is that I have abandoned her.

She is a fighter.  Not a fighter like a cancer fighter but a..... an..... arguer.  She has a need for us to get together in person and HASH THIS OUT.  We've already tried that and, to me, it felt like having knives thrown at me.  I felt wounded and bleeding after the 'talk'.

I want to 'talk' through email and text - at least initially - until some of her rage is gone.  She sees that as me "playing games".

So we are at a standstill.  When I wished her "Happy Easter " through text, she responded with "Please don't text me if you won't even talk to me.  I don't want to play these games".

Because, some people ARE conflict.  It's under their skin, in their blood...... it's how they deal with life.  I don't think she made herself this way.  And I think it might, unfortunately, be impossible for her to make herself any other way.

I'd love to blame it on being an only child.  I don't know how to fight.
One of my mom's favorite stories was how, when I was twelve and playing outside with a neighbor girl,  I ran into the house and cried "Barbara hit me!".  My mom (who grew up with six siblings) sardonically said, "Well, go hit her back".  A few minutes later, I ran back in and blubbered "But she won't stand still!"

Let's see if I can answer my own question:

In this particular case, I believe that the child will not be affected by the the plan being squashed.
I think it's about six of one, half a dozen of another.  It won't make a difference.
In this particular case, it was primarily my ego that was hurt.
So........ my response will be to     l.e.t.   i.t.   g.o.
I don't need to react in a way that will damage professional relationships.

But I ALWAYS need to make sure that I'm truly looking at what is in the best interest of the child and not justifying things just so I won't have to face a conflict.  For that, I need the opinions of others in the know.  I've gotten that today.

I need to embrace the conflict with faith that it will lead to a peaceful resolution.  Sometimes we have to go through the fire to reach the stream.