The Irene Branch Theory of Doing Something Different

My mom was a recovering alcoholic, a strong member of Alcoholics Anonymous, and basically a self-taught counselor.  She was actually employed as a counselor for many years by the Texas Tech School of Medicine but didn't have a college degree and had never taken a counseling or psychology class in her life, except for workshops.  She believed strongly in a book called Becoming Naturally Therapeutic by Jacquelyn Small.  And that's what she was - naturally therapeutic.  At least to some people.  To others, she was known as the Big Book Bitch because she called it like she saw it, didn't mince words, and called alcoholics on their denial all the time.

Not being educated in clinical counseling gave her ability to not get stuck in a box about how a counselor was supposed to do things.  I think many of the ideas that she came up with to help people were placed in her head by her Higher Power - since they weren't things that she had been taught in class or had read in theoretical tomes.  Or else she made it all up.

My mom talked about "doing something different" a long time before it became a popular solution-focused therapy strategy.  In fact, my memories of my adolescence are that any time I complained, struggled, feared, felt........ she told me to 'do something different'.  I'm sure she didn't tell me that often, but in my head, it was one of those sayings that my adolescence and young adulthood were peppered with.  Along with....

"Chances are if you're bored, you're boring."
"Don't give a problem to God then take it back."
"Modulate your voice."
"You can tell someone to go to Hell in such a way that they'll want to hurry up and get there."

My mom believed that if one wanted to make a BIG change in their life, one should start out with little changes in their daily routine.  She taught that these little changes would:
(1) serve as a constant reminder of the big change one was trying to make
(2) keep one in a state of awareness of their goal
(3) make "change" less uncomfortable

And she had odd creative ideas about what these little daily changes could be.  I heard her tell people (including myself) to start brushing their teeth with their non-dominant hand, to sleep on a significantly different pillow,  to wear their watch on their other arm,  to dress up everyday/dress down everyday/dress differently every day..............   She had many ideas.

I imagine I sneered every time she told me to do something different.  I think I was pretty much a sneering adolescent and young adult.  And I DEFINITELY didn't do what she suggested.

Until I grew up.  Then, thank God, a lot of my mom's wisdom returned to me.  However, I frequently wonder what helpful hints to navigate life she gave me that never made in far enough in my brain for me to later remember.

Yesterday, on Day One of trying to get my eating (and life) under control again, I took off the rings I wear everyday and put some on that I never wear.  They feel uncomfortable on my fingers and get my attention every time I happen to see my hands.  They remind me of what I'm trying to do.  These rings are like little road signs pointing me in the right direction.

I miss my regular rings.  But I will wear these until I feel more grounded, more centered, and/or weigh 199 pounds.

I have lots of choices and, today, I choose to do something different. 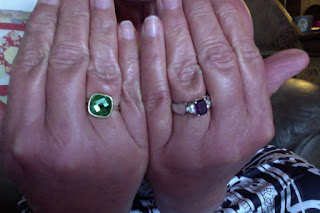